In the 1980s, several Cashier’s, NC area shooters were regularly shooting skeet at the High Hampton Inn and Country Club. In early 1986, it became clear that skeet shooting there would soon be a thing of the past. The skeet field was located on the property that the McKee family would be developing into The Wade Hampton Golf Club and would be demolished. Being an avid clay target shooter, John Druffel, the Club’s founder, decided to start a new shooting facility.

After several unsuccessful attempts to locate a suitable site, John contacted Liberty Life Insurance Company as they had owned a few thousand acres in different tracts off of Breedlove Rd. in the neighboring Glenville community. Tommy Dowling, an executive of the company, informed John they had made arrangements for most of their properties, but suggested they had recently sold a large tract to the Albert Carlton Family, long time summer residents of the area. Mr. Dowling suggested a call to Dr. Barbara Carlton who would handle such matters for the family.

In the summer of 1986, John met with Dr. Carlton, her husband, Albert, and other members of the family to lay out his vision for a new skeet shooting club. After a few additional meetings to pull all of the loose ends together, Dr. Barbara Carlton advised John they would enter into a “handshake” lease agreement for thirty-seven acres of their property for the operation of the yet to be formed shooting club.

Dr Carlton said, “I think it should be called The “Smoke Rise Field Club”. John was thrilled with the interest she had taken. Turned out she was a great quail shot and turkey hunter.

The Carlton family generously gave John the first year without rent. He worked with the Carlton’s care taker, Berlin Middleton, to prepare the site. John rented a dozer and Berlin ran it. He could do anything being one of the last real mountain men, so he was a great asset to helping John get started.

John had a prefab club house made in Georgia and delivered to the site. It arrived painted an orange color, and John could not get it repainted fast enough. Stonehedge gray was the new color with cedar shake roof and a nice observation deck. The new club house was small but served the Club well with an office, kitchen, bathroom and social area. Dr. Carlton picked out the furniture and both she and John donated art work as a finishing touch.

John constructed two skeet fields to regulation. Jimmy Davis did the electrical work for a membership. The club also paid him for the balance. Between the grading, water and septic hookup, club house, and skeet fields, John spent about $90,000 in start up costs.

Smoke Rise was incorporated on March 23, 1987 as a nonprofit social club and opened for business in July, 1987, at the Breedlove Road location in Cashiers, NC.

Now the Club needed members. John had applications and a brochure printed for the new Smoke Rise Field Club. Word spread and the first year the club accepted thirty five members. John recalls that the original initiation fee was $ 750.00 and dues were $75.00 per quarter.

As the membership grew and sporting clays became more popular, John and the board decided to add a sporting clays course, five stands and expand the clubhouse. About $80,000 in bonds were sold to fund the improvements. Some were repaid and some were eventually forgiven.

About 1990, a “Pavilion” was added to the clubhouse. A contractor named Griffith built the pavilion. It was enclosed and had the traditional shake roof. It had a nice fireplace and would seat about 100. Many great social functions were held there. These included auctions to raise funds for the club. Items for sale included hunts donated by Dr. Carlton, guns donated by members, including a Holland and Holland 28 ga. as well as many items donated by local businesses. At one party, about 120 pounds the traditional pulled pork, 6 fried turkeys and 40 pounds of smoked chicken were served to some 150 members and their guests.

John’s late wife, Dianne, took care of all of the bookkeeping for many years. She also helped John with the success of the social activities and was the club’s backbone for many years. Some of the old-timers referred to her as “Saint Dianne”.

In 2004, the Carlton’s decided to develop the land where the Club was located and the Club had to move.

The Club continued while the Board, along with a few members, feverishly searched for many months for an appropriate and affordable property. The Board had just about given up hope, but Bob Vaughn kept searching. He eventually found the current site in Rosman, NC and wrote a check for $10,000 on the spot to bind the purchase. The site contained 77 acres, ranging in elevation from 2400 to 3000 feet, a long driveway to a pond and a small cabin. The site was subsequently purchased for $660,000. The Club obtained a $495,000 mortgage, which was personally guaranteed by Dave Thomas, John Druffel, Bob Vaughn, Bob Gonzales and Barry Moore. The Club had about $60,000 in the bank including a land acquisition fund. The balance to purchase the land was obtained from a $1,500 per member assessment and gifts from members.
Several members met on the property just after the closing and shot a few hand-thrown targets from in front of the cabin in a ceremonial “clay target breaking”.

John Druffel came back on board to help with raising the funds to build the various courses and trails, buy traps and have operating capital. An additional $357,000 was contributed by the members. Those 49 members making these initial gifts are “Charter Members” and their names are inscribed on a plaque in the clubhouse.

It is worth noting that Smoke Rise is a non equity club, and should the club ever go out of business, any proceeds from the sale of the property, plant and equipment will be donated to charity. The donations made by the Charter members were because they loved to shoot and loved the comradery of the members–not that they expected to recoup their money.

• In 2006 and 2007, the trap, skeet and 5-stand venues were completed and the storage shed added.
• In 2008 a cover was added to the original, smaller, 8-trap 5-stand that is now known as the “Gonzales 5-stand” in memory of previous president, Bob Gonzales, whose ashes are scatted on the field.
• In 2009, the covered deck and fireplace were added to the clubhouse.
• In2010 the parking lot was expanded and the retaining wall behind the shed constructed.
• In 2011 the perimeter road was constructed and a second equipment storage shed added below the pond dam.
• In 2012 the “Ridge” sporting clays course was completed on the perimeter road.
• In 2014 the “Cottingham Big Boy Covered 5-stand” with 12-traps was completed on the Trap field.
• In 2015 the clubhouse was expanded and completely remodeled to include men’s and lady’s restrooms, larger social and office areas and ammunition storage.
• In 2016 the pistol range was updated
• In 2017 a shooting bench and 100-yard rifle range were added on the trap and skeet field.

In 2020 a combined  cart storage and workshop building was added to replace the original storage shed and the deck was upgraded.

All this work was variously overseen by Operations Vice Presidents Bill Talley, Hal Cottingham and Gary Leedham. Much of it was again funded by generous capital contributions from the membership.

Randy Deitz remained the Club manager until he retired in 2015. He was succeeded by Chris Thorpe, the current manager.

Those using the Club today have a lot of people, who spent their time and money, to thank, for making Smoke Rise the exceptional place it is today. 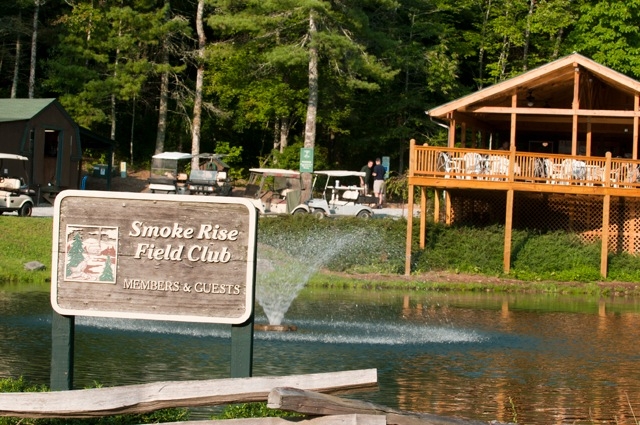 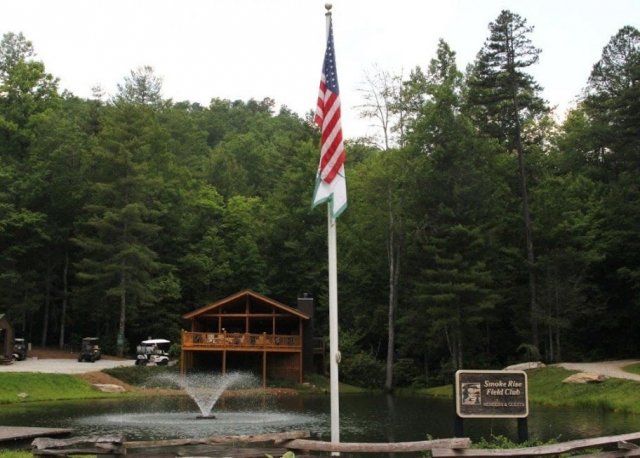 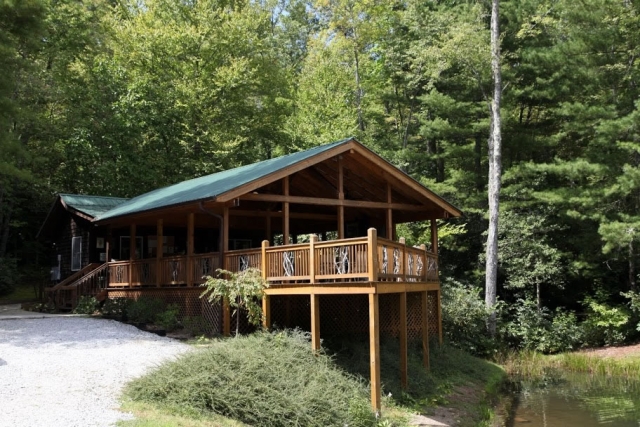 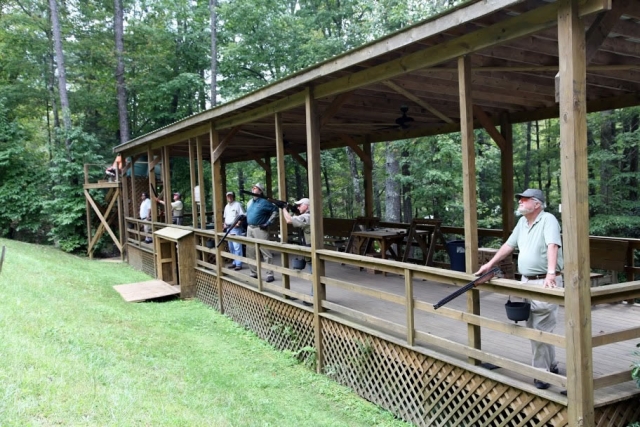 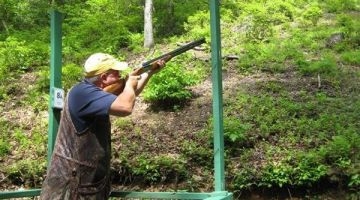 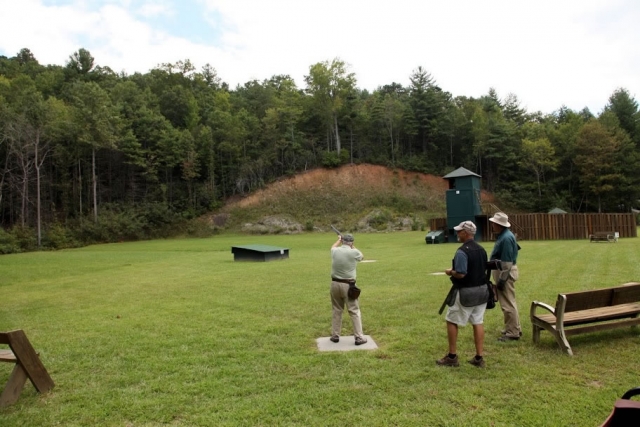 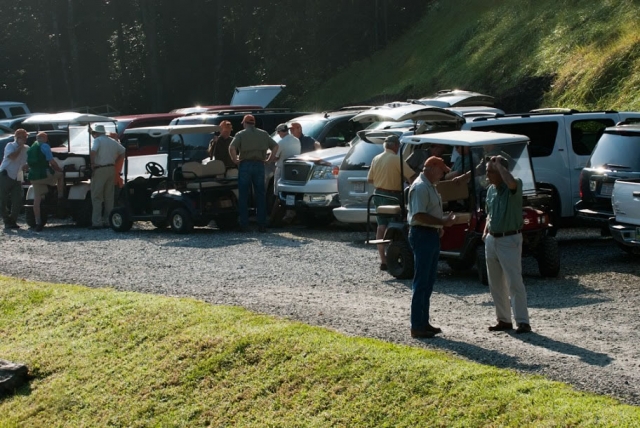 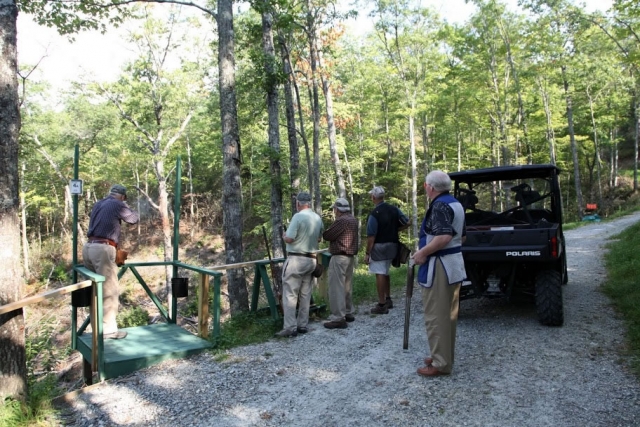 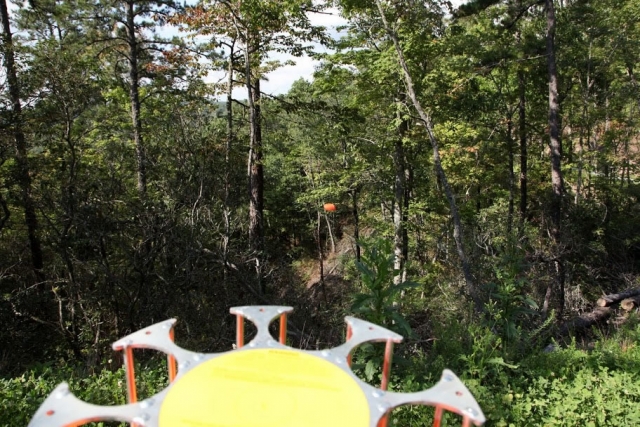 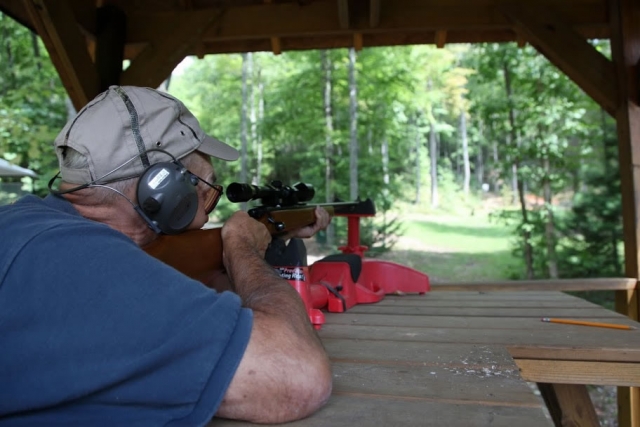 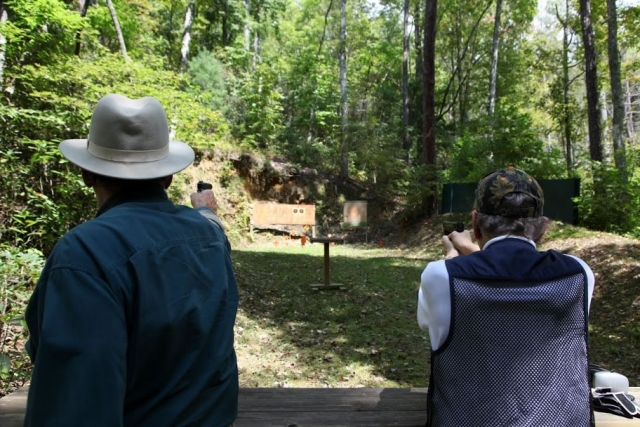 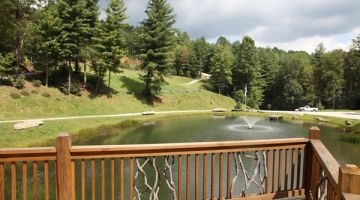 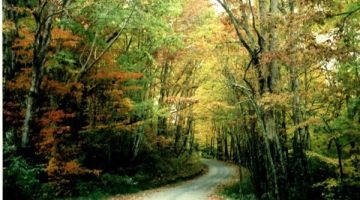 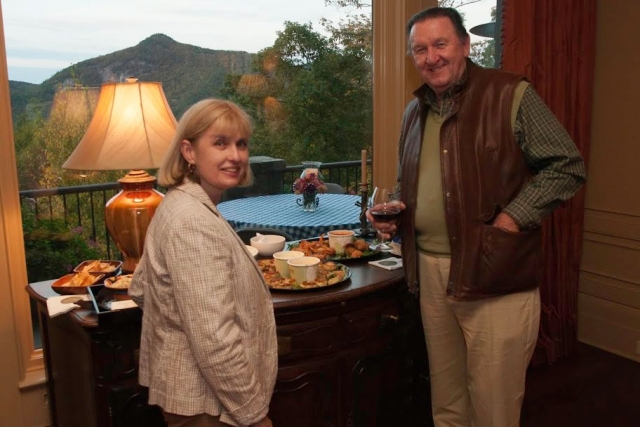 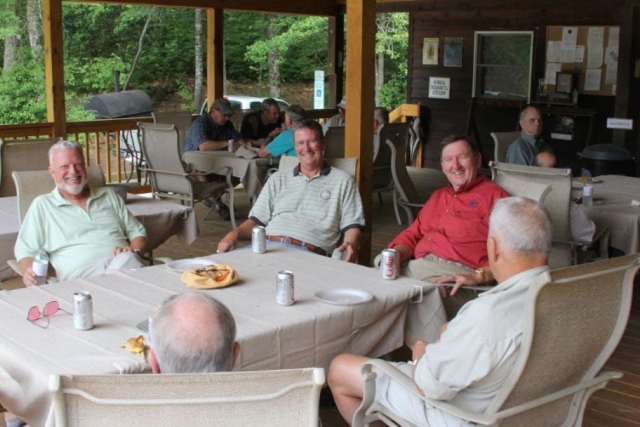 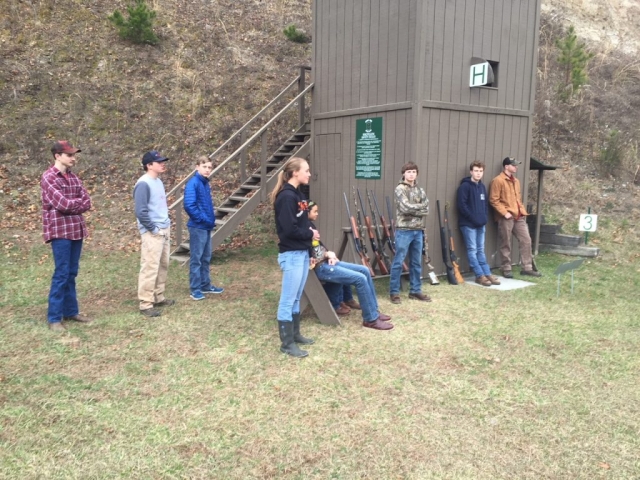 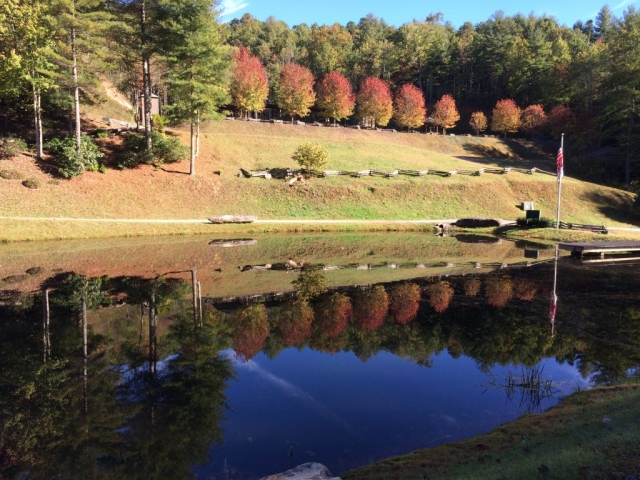 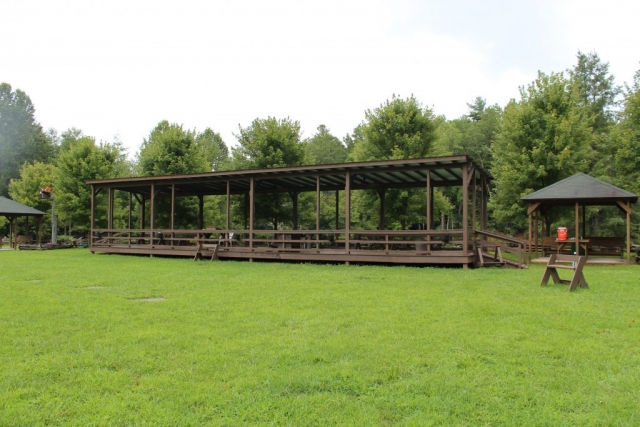 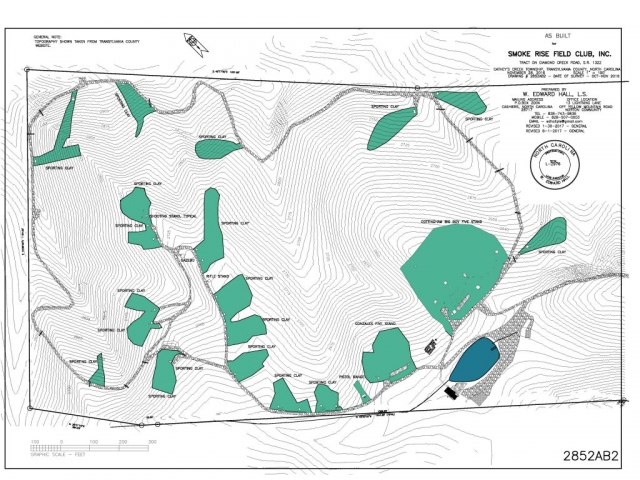 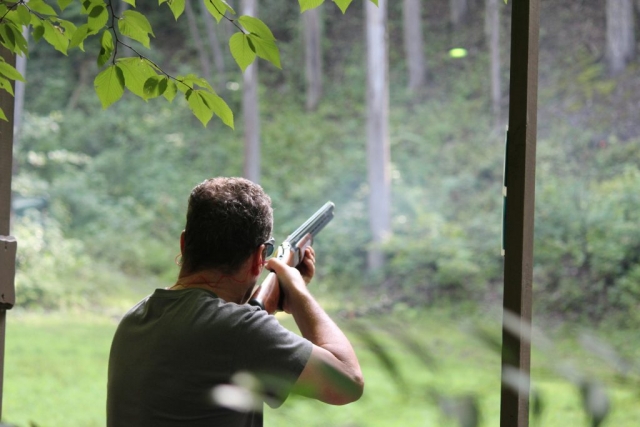 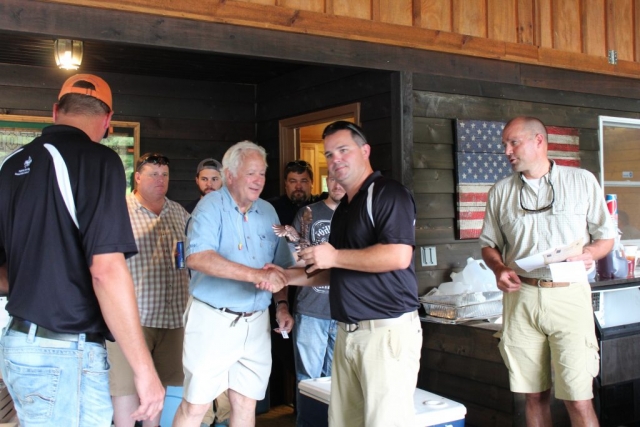 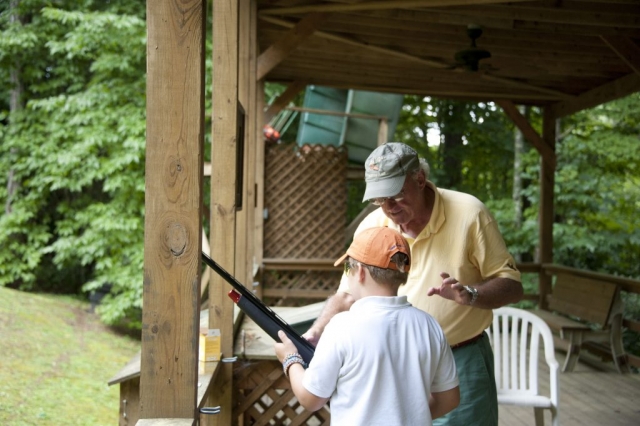 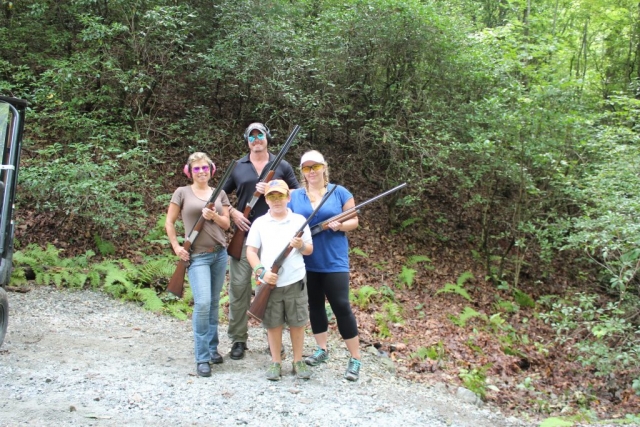